MAFE combines random sampling of households and individuals in cities in origin countries, with quota sampling among migrant populations in destination countries. Overall, between early 2008 and early 2010, more than 4,000 household questionnaires and 4,000 individual biographies were successfully completed in 3 African countries (Senegal, Ghana, RD Congo), and around more than 1,400 biographies of African migrants were collected in six European countries (Belgium, France, Italy, The Netherlands, Spain, UK).

Households: They were randomly selected to be representative of the regions surveyed in Africa. Households reporting migrants abroad and/or return migrants were over-sampled.

Individuals: The target population is defined using the same criteria in departure and destination countries in order to maximize the samples’ homogeneity:

Individuals were selected to fill four strata according to their migration status:

In the three African countries, stratified random samples of households and individuals in the target areas were selected. The target areas were the city of Kinshasa in DR Congo, the city of Dakar in Senegal, and two cities (Accra and Kumasi) in Ghana. In each of the cities, a sampling frame of primary sampling units was prepared, and primary sampling units randomly selected. A listing operation was carried out in each of the selected survey sites to prepare the sampling frame of households. The sampling frame at the second stage (households) was stratified, so that households with return migrants could be oversampled. The number of households successfully interviewed was 1,143 in Senegal (2008), 1,248 in Ghana (2009) and 1,616 in DR Congo (2009).

In each of the selected households, one or several respondents were selected (people aged between 25 and 75, and born in the origin country) for the biographic survey. In Ghana and DR Congo, all the return migrants and partners of migrants currently abroad were selected, and one other eligible member was randomly selected. In Senegal, up to two return migrants and partner of migrants were randomly selected, and another individual was randomly selected. The number of biographies successfully completed is close to the number of households (1,062 in Senegal, 1,243 in Ghana and 1,638 in DR Congo).

In five of the six European countries, no suitable sampling frame was available to select randomly individual respondents (Spain is the exception, with the Padrón). As a result, quota sampling was used. In all the countries, the quotas were set by age and gender at least. In France, the socio-professional category was also included as criteria in the quotas, while in Belgium and the UK, the place of residence was used in the quotas. In most countries sub-regions concentrating the majority of migrants were selected.

Randomness was included in the samples in different ways. For instance, in Belgium, a random sample of places was selected according to the number of people of Congolese origin living in these places. Respondents were selected in these places. The combination of different recruitment methods also ensured that different types of persons had a probability of being included in the sample. For instance, some respondents were recruited in public spaces (street, metro station, hairdresser...), others were randomly selected from list of volunteers identified in churches. In France, Italy and Spain, some of the respondents were also selected using the contacts obtained in the household survey in Senegal.

Overall, around 200 migrants were interviewed per origin country in a destination country. It is a little lower in the UK (around 150 per origin country) and higher in the Netherlands and Belgium (around 280). Currently, about 1,450 African migrants have been interviewed in Europe. A new wave of about 400 migrants in Spain was launched in 2010-2011 and will be added to the overall sample. 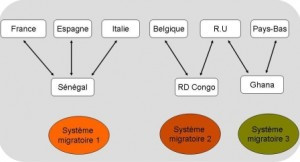